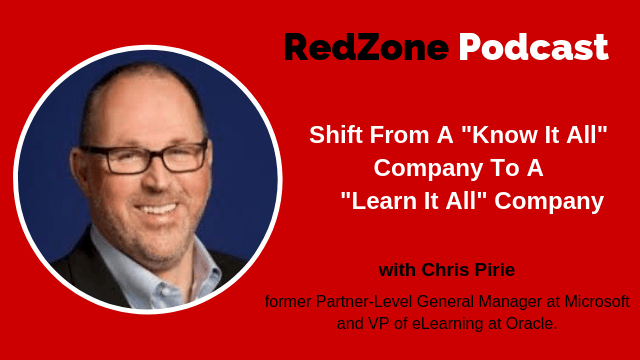 If you enjoy listening to my podcast, please take a minute to leave a review here!

My guest this week is Chris Pirie, who until recently, was General Manager in Microsoft’s SMGSR organization. Chris led the training and readiness for all Microsoft’s sales, marketing, and technical field employees worldwide.

Chris joined Microsoft in September 2004 as Senior Director of Learning Product Development, and subsequently he held global sales and marketing responsibility for Microsoft Learning, the organization’s customer training business. Chris has launched The Learning Futures Group which helps organizations rethink their Learning and Development strategy in the face of historic disruption and change in the workplace.

What You Will Learn from this Interview:

With this, I want to welcome you to my interview with Chris Pirie.

Major Take-Aways from this Episode are:

Chris brings a passion for driving disruptive change and innovation, a proven business and people leader of large functional teams in very dynamic enterprise environments. Skilled in strategic Partnerships with leading business schools such as INSEAD, and learning related technology and service providers.

Chris has launched The Learning Futures Group to help organizations rethink their Learning and Development strategy in the face of historic disruption and change in the workplace. He was formerly a Partner-Level General Manager at Microsoft and VP of eLearning at Oracle.

Ways to Connect with Chris Pirie

What Our Listeners Say

As an IT guy, this podcast is a treasure to me. Every individual episode discuss about new security options. Nice source for IT people!