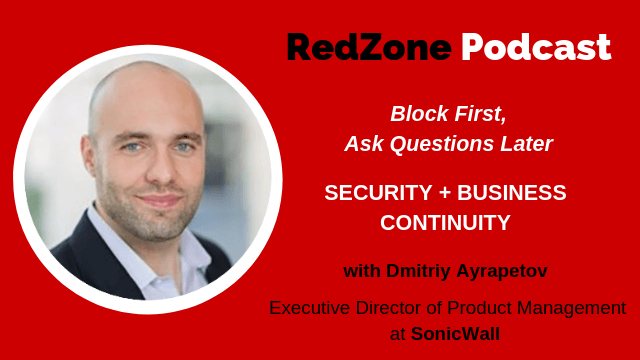 If you enjoy listening to my podcast, please take a minute to leave a review here!

As many of you know, I like to choose podcast topics that are at the forefront in the minds of my audience. I also like to interview leaders who inspire me. When I was looking for a new podcast guest for my show, I asked my CTO at RedZone, James Crifasi, if there was someone he knew in security that he really respected – that stood out for him as a leader in the industry.

James recommended Dmitriy Ayrapetov, Executive Director of Product Management at SonicWall. Since RedZone has been a SonicWall partner for many years, I knew Dmitriy, and I knew that he represented most of the network security products that we work with. Luckily, he agreed to come on the show.

My conversation with Dmitriy ranges from philosophical to tactical and technical especially with his positions on Machine Learning and AI with security. We discuss a variety of topics including, who are his mentors and what does a product manager do at a high-profile security company like SonicWall?

One interesting discussion centered around the thought that, “Humans will always make mistakes – human mistakes are one of the main issues with security. Knowing that we will never fix 100% of the problems of security today, and that we have a massive likelihood of a security breach happening,” – I asked Dmitriy “How can you approach this problem?”

Key Points of Interest in This Episode:

Are your security vendors as concerned about business continuity as you are?

I think you will really appreciate Dmitriy’s philosophy for CIOs and CISOs – in particular, his thoughts on human mistakes. He believes that since human mistakes can’t be prevented, that you must realize the need for continuity of the business and be prepared for them.

With this, I want to welcome you to my interview with Dmitriy Ayrapetov.

In this podcast we discuss cutting edge strategies with security: sandboxing, block until verdict, remediation and roll back.

Dmitriy Ayrapetov has been with SonicWall for over 13 years. He is currently the Executive Director of Product Management at SonicWall, in charge of product security. Prior to this position, Dmitriy held product management and engineering roles at SonicWall and at enKoo Inc., an SSL VPN startup acquired by SonicWall in 2005.

As a cybersecurity expert, he speaks at industry conferences including, RSA, Gartner Security Summit, Dell World and is a regular presence at SonicWall’s annual partner conference Peak Performance. Dmitriy holds an MBA from the Haas School of Business at U.C. Berkeley and a BA in Cognitive Science at UC Berkeley.

You can see all the SonicWall products Dmitriy has had his hand on since the beginning.
• Network Security
• Firewalls
• FTDMI – Automation and Security
• SonicWall ips Series
• Client Capture – rollback
• Email Security

How to get in touch with Dmitriy Ayrapetov

Other presentations and videos by Dmitriy Ayrapetov:

Other resources mentioned in the Podcast, provided by Dmitriy Ayrapetov:

There are two people that Dmitriy mentioned as thought leaders in the field: one of them is well known, Bruce Schneier, an internationally renowned security technologist; while the other is less known, Dan Geer, CISO at In-Q-Tel. Bruce provides a lot of industry as well as practical advice on his website: https://www.schneier.com/. Dan’s keynote at Black Hat 2014 was, in my opinion, direction setting. It was one of the highest signal to noise ratio keynotes that I’ve ever heard and I still come back to it from time to time. It’s very dense, and is based on an essay that he authored.

The book that Dmitriy mentioned early in the podcast is Hacking Exposed –they’re on the 7th edition now. I’m not “recommending” the book, I just referenced it as something that piqued my curiosity in security early on.

Leave a Review
If you enjoyed this episode, then please consider leaving an iTunes review here.

What Our Listeners Say

As an IT guy, this podcast is a treasure to me. Every individual episode discuss about new security options. Nice source for IT people!