Some big news in tech this week as Tesla experienced an outage that left users unable to access and drive their vehicles using the mobile app, and staff unable to process deliveries and orders. 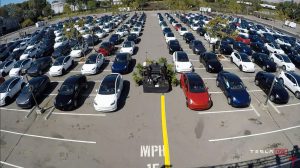 As Jonathan Shieber and Kirsten Korosec detail in their piece for TechCrunch, the outage on Wednesday was reportedly caused by “An internal break of their application programming interface (or API).”
https://tcrn.ch/33ONtWY

The glitch in the app could also have something to do with Tesla’s new two-factor authentication. Last month, Tesla CEO Elon Musk said that two-factor via SMS or an authenticator app, both industry norms that should have been in place for Tesla years ago, would be coming soon.

This outage is important on a broader scale, however.

🚗 This outage highlights how dependent companies like Tesla are to their networks. Any small hiccup or breach has mass impacts.

🚗 The electric car movement isn’t going anywhere. The governor of California just signed a bill banning the sale of gas-only cars by 2035. With their user base only growing, Tesla and other similar companies will have to find a way to keep their staff and users secure.