Teaching Others About IoT – Be Prepared to Educate – Learning Items Below:

Uri is a leader in the world of research as it relates to IoT Security, cognitive authentication, and advanced cyber security strategies. This interview is a great learning tool to educate yourself so that you can educate your peers about where IoT is going and what it means to you and leaders in your business.

Uri originally presented this material at RSA with Sam Curry, CTO – Arbor Networks. You can access the slides here: IoT: When Things Crawl Into Your Corporate Network 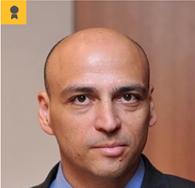 Uri Rivner has been fighting cybercrime for 12 years. He currently heads Cyber Strategy for the cognitive authentication company, BioCatch. Rivner’s prior role was Head of New Technologies at RSA. He has been working closely with the world’s largest organizations to establish strategies against advanced cyber threats. He is also very interested in IoT, and the huge opportunity they present for evildoers who wish to breach private and corporate security.

During my interview Uri and I discuss the current state of IoT Security. I have listed the key learning items below. You can also listen to the podcast if you prefer to simply listen to the episode as you drive to work.

Every device has to be aware of it’s environment. If you control a thermostat you can impact and influence the environment. IoTs will increase and bring more and more complexity and will be like an eco-system or supply chain. These devices are environmentally aware.

“Tidal Wave” and “Turn of the Tides”

Because standard hacking tools prevail and are easier today. It is simpler to exploit old vulnerabilities. IT is the path of least resistance now. At some point we will have a ‘turning of the tides’ and IoT vulnerabilities will be exploited.

IoT is like BYOD. The consumer is driving adoption and demand and business efficiency.

There were ways to respond to BYOD with tools and solutions like Citrix, VMWare, etc but the IoT market does not have tools or standards!

The recommendation is Do it and figure it out

This is a good video showing what the future will looks like. I highly recommend watching it.

Vulnerabilities – How Do You Fix and Patch IoT Devices

IoT devices weren’t designed to be rebooted. This will need to change.

What Should the Industry Do? – Top Three Rules for the IoT industry:

1. Don’t save security for later. Build it into the stack now.

3. The IoT device must only be released if it can patch itself (patching is a vulnerability)

Will security happen with IoT – No, because the industry is so completely de-centralized, kickstarter economy is driving innovation first and security is not a priority…who would blame them… it is a VC funded and wild west market focus now. The goal is being agile.

Arduino is an open-source prototyping platform based on easy-to-use hardware and software. Arduino boards are able to read inputs – light on a sensor, a finger on a button, or a Twitter message – and turn it into an output – activating a motor, turning on an LED, publishing something online. All this is defined by a set of instructions programmed through the Arduino Software (IDE).

Over the years Arduino has been the brain of thousands of projects, from everyday objects to complex scientific instruments. A worldwide community of makers – students, hobbyists, artist, programmers, and professionals – has gathered around this open-source platform, their contributions have added up to an incredible amount of accessible knowledge that can be of great help to novices and experts alike.

What Can you Control with IoT

Implications for IoT Security for your Company

Read and Learn Further About Uri:

All methods of how to access the show are below:

Bill is dedicated to your success as an IT Business Leader. Sign up/Subscribe for weekly podcast, CIO Mastermind and CISO Mastermind updates delivered to your inbox easily and effortlessly: Follow Bill on LinkedIn and Twitter.

How do I leave a review?